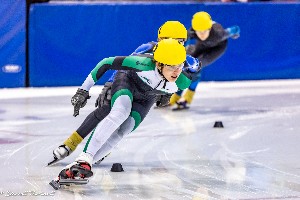 Saul Grant of Charlottetown will be one of twenty Islanders competing in this weekend’s Atlantic Cup Speed Skating Championships at the Eastlink Centre in Charlottetown. Photo courtesy of Darrell Theriault.

Speed Skating PEI President Eric Reynard says that athletes have been eagerly awaiting the return to competition in Atlantic Canada. “Last year’s Atlantic Cup was one of just two Atlantic events to escape the COVID-19 / Omicron wave, so it has been almost a year away from competition again. We are ecstatic to be hosting the Atlantic Cup this year and can’t wait to see the racing unfold this weekend.”

Speed Skating PEI says that 11 clubs from across the Atlantic provinces and Nunavut will take part in the event. P.E.I. will be well represented, with 20 Island skaters competing. Reynard said that organizers are especially pleased to be welcoming the 16 athletes plus coaches and support team from Nunavut. “This is a huge undertaking for team Nunavut, and we’re honoured that they’ve chosen the Atlantic Cup as a qualifying event toward the Arctic Winter Games later this season.”

Atlantic Cup racing runs from 8:40 am until 5:00 pm on Saturday and from 8:40 am until mid-afternoon on Sunday at the Eastlink Centre. The event will feature 10 racing divisions, including the Atlantic Cup’s largest ever Special Olympics division. Skaters from ages six to masters / adult skaters will compete over race distances ranging from 85-metres for the youngest skaters, up to 3,000-metres for the fastest and most experienced competitors. The public is welcome to attend and admission is free.

For more information about the Atlantic Cup and speed skating programs on P.E.I., visit www.speedskatingpei.ca.