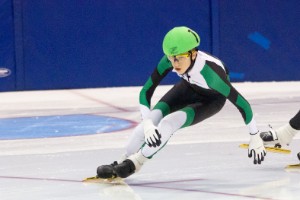 Addison Bruce of Stratford will be one of over twenty Islanders competing in this weekend’s Atlantic Cup Speed Skating Championships at the Eastlink Centre in Charlottetown. Photo courtesy of Amanda Burke.

Atlantic Cup co-ordinator Jean MacDonald says it promises to be an exciting return to competition for the athletes after a break of 20 months since the last speed skating meet in Atlantic Canada. “We are thrilled to be hosting the Atlantic Cup again after such a long period without competition. Skaters from across the region are excited to compete and we know there will be some great racing, as always.”

Speed Skate PEI President Andrew Jack said it was difficult not to host the event last season, and that the sport body felt it was important to bring back the event with the appropriate health precautions this year. “We’re fortunate that given the high rates of vaccination on P.E.I. and within Atlantic Canada, that we can host a Vax Pass event and re-launch speed skating competition in a safe way for the region.”

Speed Skate PEI says that nine clubs from Atlantic Canada will take part in the event. P.E.I. will be well represented, with over 20 Islanders racing.

Atlantic Cup racing takes place from 9:00 am until 5:00 pm on Saturday and from 8:30 until mid-afternoon on Sunday at the Eastlink Centre. The public is welcome to attend and admission is free. All spectators aged twelve and up must show ID and proof of vaccination.

For more information about the event and speed skating programs on P.E.I., visit www.speedskatepei.com