February 28th, 2020, Charlottetown – P.E.I. speed skaters turned in strong results at a Canada Cup short track event in Sherbrooke, Que, and at the Atlantic Canadian Short Track Championships in Dieppe, N.B., recently. Jenna Larter and William Lyons represented the Island at the Short Track Canada Cup 2 competition, while a team of 21 Island skaters took to the start line in Dieppe.

At the Canada Cup, Larter notched her best finish in the 500-metre distance, placing 14th among the 60 elite female skaters. The Brookfield skater, who has been training at Calgary’s Olympic Oval this season, placed 30th overall, improving by 15 spots from her 45th place finish at the same event last season. In the men’s competition, William Lyons of Rock Barra made his Canada Cup debut a memorable one, with personal best (“PB”) times in all three distances. Lyons posted his best finish, 46th, in the 500-metre event, where he broke the 45 second mark for the first time and posted a new PB time of 44.28 seconds in the high-powered field. With the new PB times, Lyons became the fourth fastest short-track skater in P.E.I. history over both the 500- and 1000-metre distances, while also posting the fastest times by an Island skater this season. Both Larter and Lyons qualified for the Short Track Canada Cup Junior Final to be held in Richmond, B.C. in mid-March. 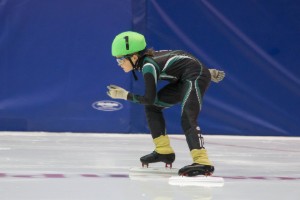 Meanwhile, the P.E.I. team grabbed six medals at the Atlantic Championships. Special Olympics Skater Logan Robbins took home gold for the Island team in the Special Olympics division with wins in all seven races and PB times in all four distances. Robbins also broke one minute in the 500-metres for the first time, with a time of 58.823 seconds. Anderson Arseneau claimed P.E.I.’s other gold medal, in Division 6 (male), with wins and new PB times in the 200- and 400-metre distances, along with a second-place finish in the 3000-metre points race. 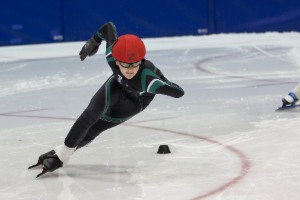 Zander O’Meara rounded out the Island’s podium finishes with a bronze medal in Division 7. The rookie nabbed a pair of PB times and a win in the 1,500-metre distance to help secure his third medal in as many tries.

Carter Bruce posted the fastest times among Island skaters in Dieppe, skating to fourth place in Division 1 after setting new personal best times in the 500- and 1,500-metre distances. Zack O’Meara, also skating in Division 1, set a new P.E.I. record for Juvenile boys in the 1,500-metre distance, shaving a second from Niall Burnett’s 8-year-old record, with a new record time of 2:29.566.

The Dieppe event featured 192 skaters from 13 clubs from across Atlantic Canada and Nunavut. Anthony Cormier-Losier of Fredericton topped the male standings with his Division 1 win, while Angela Xu of Saint John took top honours among female skaters.