Lyons, who has been training in Sherbrooke, Que. this season, made his AmCup debut on the heels of his first Canada Cup appearance. The sixteen-year-old Islander continued his excellent season with a 15th place overall finish after three days of competition in the select, 32-skater AmCup field. Lyons had his best finish in the 500-metre distance, where he claimed 12th place. The Kings County native also finished the competition as the 4th ranked Canadian skater among the dozen Canadian males competing. 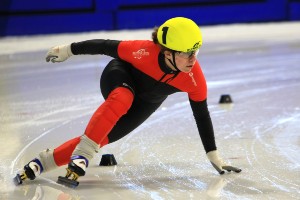 At the Western Elite Circuit meet in Calgary, Jenna Larter nabbed 11th place in the 36-skater female field, which featured strong competition from Canada, the U.S., Japan and Singapore. The Brookfield athlete, who has been training at the Olympic Oval in Calgary this season, set a new personal best (“PB”) time in the 1,000-metre distance, with a time of 1:36.201, just one-tenth of a second shy of the fastest ever time by an Island female in the short track distance, set by Carly Connell at the 2015 Canada Winter Games.

It was the second individual gold medal of the season for Binns, who also claimed a gold medal, in the relay, at the 2020 Winter World Masters Games in January as part of the Canadian men’s team. It was Carter Bruce’s fourth Division 1 podium finish of the season, powered by PB times in the 500- and 1,500-metre events, as well as a second-place finish in the 3,000-metre points race. Addison Bruce earned his third medal of the season, while Jane Bruce maintained her medal streak with her sixth medal in six competitions this season, after a five-second PB time in the 1,500-metre distance.

Also competing for P.E.I. in Campbellton was Kyle Connell, who skated to sixth overall in Division 1. The competition featured 67 skaters from 11 clubs in New Brunswick, Quebec, Ontario and P.E.I.