November 19th, 2021, Charlottetown – P.E.I.’s William Lyons nabbed top spot at the recent Atlantic Cup Speed Skating Championships in Charlottetown. Lyons’ overall win was one of ten medals earned by the Island short track team as it kicked off the new season on home ice. The event, hosted by Speed Skate PEI, saw more than 100 skaters from nine Atlantic clubs take to the ice at the Eastlink Centre in the region’s first speed skating competition in more than 20 months.

Lyons, from Rock Barra, won three of four distances enroute to his overall Division 1 gold medal. Also notching gold for the Island squad was Logan Robbins in Division 4, who swept to the top step of the podium with wins in all four distances. 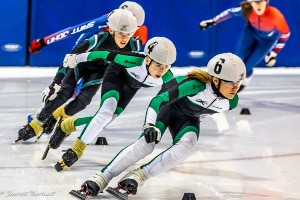 Silver medal winners for P.E.I. were Calum Lea (Division 3), Jordan Koughan (Division 4), Brendan Reynard (Division 5) and Olivia Zhang (Division 6). For Lea, the medal marked a successful competitive debut in his first season of speed skating. Koughan skated to personal best (“PB”) times in a pair of distances, while Reynard, from Charlottetown, posted wins in two distances along with a pair of PB times in his fast division. Zhang, who holds a provincial record in the 500-metre distance, won the 200-metre sprint and posted a pair of new PB times.

Speed Skate PEI Technical Director Sarah Taylor said that the Island team performed well at this first competition since early 2020. “Everyone was anxious to get back to racing. This gave us a chance to see the dividends of last season’s training, along with this year’s continued work on and off the ice. Our skaters have been patient and it is great to see their efforts pay off in competition.” 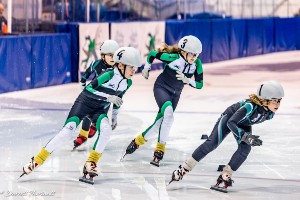 Speed Skate PEI President Andrew Jack thanked Atlantic Cup volunteers and sponsors. “We were thrilled to re-launch competitive speed skating in the region thanks to the tremendous volunteer work of our host team as well as volunteer support from across the Maritimes. Seeing our P.E.I. skaters perform to the level they did is icing on the cake for us.”

P.E.I.’s ten medals tied with Caraquet for tops in the Atlantic Cup club medal tally. Saint John’s Morgan Haslett was the top ranked female skater in the competition, while Jane Bruce of Stratford was the top-ranked female from PEI.