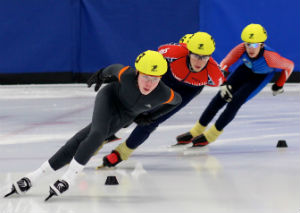 “Our skaters are making great progress, even early in the season,” said P.E.I. coach Kathleen Cullen. “Many of them were moved up to tougher divisions after great showings at the Atlantic Cup earlier this fall. They proved that they were up to the challenge, with numerous PB times and great races in Fredericton,” continued Cullen.

Roger Fulton of Fredericton claimed the top spot overall in the meet, followed by Seamus Smith of the St. Croix Blades and Tyler MaGee of Saint John. Maggie Oliver of Saint John was the top female skater, followed by AbbyGail Jackson of the Codiac Cyclones. 154 skaters from eleven clubs in the Maritimes and Quebec participated in the meet.

Nine members of the Island team in Fredericton will be among Island skaters vying for a chance to represent P.E.I. against the best young skaters from Ontario, Quebec, the Atlantic provinces and Nunavut at the Canada East Short Track Championships being held in Charlottetown on March 26 & 27.