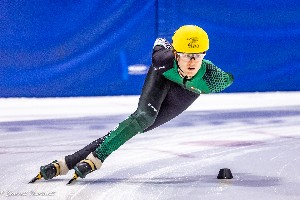 William Lyons of Rock Barra will compete for PEI at the Canadian Junior Short Track Open in Calgary this weekend. Photo courtesy of Darrell Theriault.

William Lyons of Rock Barra will lead the Island team, competing in the Canadian Junior Short Track Open (16–18). Lyons is coming off a strong 2021-22 season, where he became the first Island male since 2011 to qualify for the Canadian Junior Short Track Championships. Lyons raced most recently in an Ontario Provincial Time Trials event in Kitchener-Waterloo last month, where he clocked the second-fastest times in both 1,000-metre and 500-metre events.

Joining Lyons at the 16–18 event will be Zack O’Meara of Charlottetown. O’Meara made his national-level debut at the Short Track Canada Cup Junior Final in Richmond, B.C. last March and will be looking to gain more high-level experience in advance of this season’s Canada Winter Games. O’Meara recently skated to new personal best (“PB”) times in both the 500- and 1,500-metre events at the Ontario Provincial Time Trials competition.

Jane Bruce of Stratford will represent P.E.I. in the Canadian Junior Short Track Open (14-15) event. Bruce is coming off a strong debut on the Quebec Provincial circuit in Rimouski last weekend, where she claimed an overall bronze medal in Group 2, with PB times in both the 500- and 1,000-metre events. 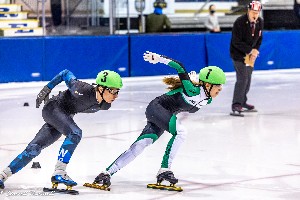 Anderson Arseneau will also skate for P.E.I. in the 14-15 Open, marking his first competitive outing since the start of the COVID-19 pandemic. The Charlottetown skater, like his three Island teammates in Calgary, is a member of the Island’s short track training team for the 2023 Canada Winter Games. Arseneau will be looking to establish strong times on the fast Calgary ice.

The Canadian Junior Short Track Open (16-18) event serves as a qualifying opportunity for the Canadian Junior Short Track Championships, while the 14–15 Open serves as an introduction to national level racing. Sixty athletes per gender will compete in the 14–15 Open and 40 athletes per gender will take to the ice in the 16–18 Open.

Racing begins on Saturday with the 1,500-metre and 500-metre events and concludes on Sunday with 1,000-metre and relay events.

For live streaming and more information about the events, visit https://speedskating.ca/events/.