September 7, 2018, Charlottetown – With the Canada Winter Games only five months away, the coming season holds special significance for some P.E.I. speed skaters. A dozen or more P.E.I. skaters could be taking to the ice for Team PEI in Red Deer, Alberta in February. The group has been training and preparing for months leading up to the 2019 edition of the Canada Winter Games. 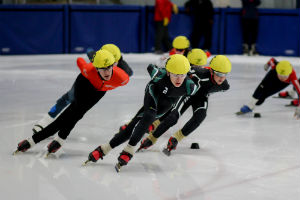 P.E.I.’s Carter Bruce is one of a dozen Island skaters aiming for a berth on P.E.I.’s speed skating teams for the 2019 Canada Winter Games. Photo by Kristen Binns.

“The time and dedication it takes to be competitive at this level is significant,” says Sarah Taylor, who will coach P.E.I.’s short track contingent in Red Deer. “These young athletes are learning about commitment, discipline and time management – all of which will serve them well throughout their lives, not only in sport.”

Speed Skate PEI says that the Red Deer Games will be a milestone not only for the Island athletes competing, but for the sport of speed skating on the Island. “We believe this will be the first time that P.E.I. has fielded both male and female Canada Winter Games teams in both the long track and short track disciplines,” says Andrew Jack, Vice President with the Island body. While P.E.I. has sent female and male short track teams to all Canada Winter Games since 1995, only two long track teams from P.E.I. have competed in the last six Games – men’s teams in 1995 and in 2007. Carolyn (“C.J.”) Jarock has been named coach of the Island long track teams for 2019.

“With the 2023 Canada Winter Games expected to be held on P.E.I.,” said Jack, “this chance to showcase long track as another opportunity for young P.E.I. skaters is exciting for us. We think we’ve got a lot of potential for further growth in our sport here over the next few years leading up to 2023.”

While the Canada Winter Games are a big event for older athletes, Jack says that speed skating is about much more than competitive opportunities like the Canada Games or the various competitions throughout the region. “The keys for all of our skaters are fun and personal development,” said Jack. “Learning to skate and learning speed skating is about improving individual skills and building confidence, not just race outcomes.”

Speed Skate PEI is now taking registrations for its Charlottetown programs, including Learn to Skate and Learn to Speed Skate, online at www.speedskatepei.com. The season gets underway in late September.