In the short track championships, held in Dieppe, N.B., the Island team of twenty-two skaters grabbed seven medals, while also claiming five of the top six overall positions in the competition, which featured 166 skaters. At the long track championships held on the Emera Oval in Halifax, five P.E.I. skaters took to the start line, with a pair of Islanders bringing home medals. 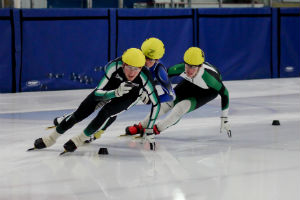 Jacob Taylor, competing in his first off-Island meet, garnered the Island team’s lone gold medal on the short track in Dieppe, skating in division 11. Taylor picked up where he left off in November, when he also earned a gold medal at the Atlantic Cup meet held in Charlottetown.

Taking home silver medals for P.E.I. from Dieppe were Charlottetown speedsters Peter McQuaid in division 1, Alex Rogers in division 6, Frankie Hancock in division 10 (female) and Brendan Reynard in division 10 (male). McQuaid had his best finish in the 500 metre sprint distance where he took top honours, enroute to his second place overall finish in the meet. Rogers overcame falls in his 200m and 400m heats with a strong showing in the 1500m distance, while also recording new personal best times in all three of his timed distance finals. Hancock’s silver medal was an impressive competitive debut after she took up the sport just last month. Reynard, meanwhile, earned his third medal in as many tries this season, after winning gold in both Charlottetown and in Saint John in November and December.

Andrew Binns in division 1 and Mia Stewart in division 5 earned bronze medals for the P.E.I. team.

Also representing the Island in the top division at the short track event were William Lyons, Matt Kozma and Rob Binns. Lyons and Kozma earned qualifying times to compete on the Quebec Provincial circuit after both recorded new personal bests in the 500m and 1000m distances. Binns set a new provincial record for Masters men (ages 40+) in the 1500m distance, bettering his own mark from 2015. The trio, along with McQuaid and Andrew Binns, gave P.E.I. five of the top six overall spots in the Championship.

Tyler MaGee of Hampton, N.B. claimed the top overall spot for males, while Angela Xu of the St. Croix Blades, Alyssa Rusk of Fredericton and Anny Kang of Saint John took the top three spots among female skaters in the meet, which featured competitors from fourteen clubs across the Atlantic provinces as well as from Nunavut.

The Island team in Halifax was the first to represent P.E.I. at the long track event since 2014 and was led by Carter Bruce who took top spot in the 14 year-old boys age group and by Andrew Binns who grabbed 3rd overall in the Junior Open category. Bruce won three of his four distances enroute to the overall win for his group, while also establishing a pair of new provincial records in the 300m and 3000m mass start events for Junior-aged men.

Also competing for P.E.I. on the Halifax oval were Matthew McKenna, Dakota Jager and Addison Bruce, each of whom set new provincial records. Jager’s competition was shortened due to injury, but not before she bettered her own provincial record for Junior women in the 500m outdoor olympic style event. McKenna took ninth place in the Junior men’s open category, while also establishing new provincial outdoor olympic style records for the 16-17 year-old age group in the 1500m and 3000m distances. Addison Bruce set provincial outdoor records for Juvenile boys in four events, including the 300m, 1500m and 3000m mass starts, as well as in the 500m olympic style. Bruce finished eighth in the 13 year-old boys category,