Jenna Larter consolidated her position as P.E.I.’s fastest ever female on the short track, with new Island-best times in a pair of recent competitions in Calgary. Photo Courtesy of Yi Kay.

October 9, 2019, Charlottetown – Jenna Larter has started the new speed skating season where she left off last spring. The Island’s reigning queen of on-ice speed has added two new jewels to her crown, posting the fastest ever times by an Island female skater in the short track 777- and 1,500-metre distances. Larter, from Brookfield, began training at the Olympic Oval in Calgary in late July and set the new P.E.I. record time of 2:28.586 over 1,500-metres in a Single Distance Series event in Calgary in late September. Her sub-2:30 time was almost four seconds faster than her own record for Intermediate women, set in Red Deer at the Canada Winter Games in February. It was nearly two seconds better than Jenna Gallant’s previous all-ages female record, set in 2005.

Larter notched the 777-metre record time in the Olympic Oval Team Trophy competition August, just a few weeks after getting back on the ice. She now owns the fastest ever times for an Island female in the 500-, 777- and 1,500-metre distances. The 17-year-old Island skater is now looking ahead to the Short Track Canada Cup competition being held in Sherbrooke, Que., from October 18-20, where she will be vying to qualify for one of 32 starting spots in the 2019 Canadian Junior Championships.

Stratford’s Andrew Binns and William Lyons of Rock Barra also hit the ice recently for their first competitions of the season, both on the Quebec Provincial circuit. Binns took to the ice in Quebec City in the East division of the Quebec circuit, where he made his Group 1 debut and came away with 11th position overall in the event, which featured 80 male skaters. Binns, who is now training at the Canadian Regional Training Centre (“CRCE”) in Montreal, had his best
finish in the 500-metre distance, grabbing 4th place. With a strong time in the 1,500-metre event, Binns also booked his ticket to the Short Track Canada Cup in Sherbrooke. 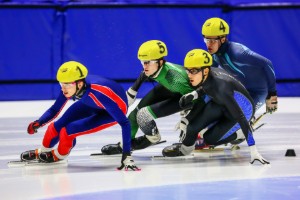 P.E.I.’s William Lyons, second from left, had a strong showing in his first competition of the season in Montreal recently. Photo courtesy of Daniel Villeneuve.

Lyons made his season debut at Maurice Richard Arena in Montreal, among 87 male skaters competing in the first West division meet of the season on the Quebec Provincial circuit. Skating in Group 2, the Kings County speedster had a second-place finish in the 1,500-metre distance, which helped propel him to a strong seventh place overall showing in his group. Lyons, like Larter and Binns, is also training out-of-province this season, with the powerful Sherbrooke club in Quebec. With his performances in the 500- and 1,500-metre distances, Lyons also met the qualifying time standard for several national-level events this season.

Speed Skate PEI President Andrew Jack congratulated the Island trio on their strong season debuts. “That we have produced three skaters all competing at this level this season is a testament to these skaters as well as to our Technical Director, Sarah Taylor and to all of our P.E.I. coaches who’ve brought them to the point where they could graduate to these programs. We’re very proud of them and we’re confident that they’re the tip of the iceberg in terms of Island skaters reaching the national stage. We know there is lots of skating talent on P.E.I. and now is the ideal time for new prospects to give the sport a try,” added Jack.

Speed Skate PEI is still accepting registrations for its Charlottetown programs, including Learn to Skate and Learn to Speed Skate, online at www.speedskatepei.com.