November 14th, 2017, Charlottetown – A trio of P.E.I. speed skaters came up with strong placements and set a bundle of new seasonal best and personal best times at a competition in Lévis, Q.C. this past weekend. The Island skaters were among 116 competitors at the second Quebec Provincial Series meet of the season. 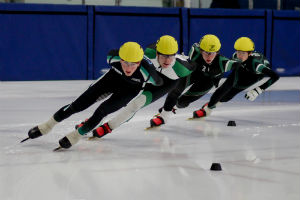 Charlottetown’s Peter McQuaid grabbed an eighth place finish in Group 1, after posting new personal bests (PBs) in both the 500 metre and 1500 metre distances, with times of 45.12 seconds and 2:24.13, respectively. McQuaid’s top finish came in the 3000m points race, where he nabbed fifth place in the A final.

Kyle Connell of Charlottetown and Andrew Binns of Stratford placed seventh and eleventh, respectively, in Group 3. Connell skated in a pair of A finals, grabbing third place in the 500m sprint, while notching new personal bests in the 500m and 1500m distances. Binns posted a large PB time in his 500m distance, along with a seasonal best in the 1500m event. Both skaters are in their first year of eligibility for the Quebec circuit.

P.E.I. coach Sarah Taylor says the Quebec competitions are a key part of the team’s preparations for best ever performances by the P.E.I. team at next season’s Canada Winter Games. “We know we’ll be putting a very fast team on the ice in Red Deer in 2019. Gaining racing experience in Quebec and in national competitions between now and then will help our athletes learn how to manage their races against some of the country’s best and put us on a new level compared to the past. It’s an exciting time for the P.E.I. team right now as we start to gain that experience.”

Up next for Island speed skaters is the Atlantic Cup Speed Skating Championships, to be hosted at the Eastlink Centre in Charlottetown on Nov 25 & 26. Organizers with Speed Skate P.E.I. expect a strong field of competitors from at least five provinces as well as from the northeast United States.