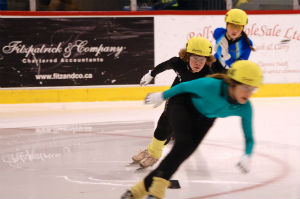 Jenna Larter (left) of North Wiltshire won a silver medal for P.E.I. at a recent short-track speed skating meet in Dieppe, N.B. The medal was one of ten for the Island team at the event. Photo courtesy of Mike Sullivan.

Taking gold medals for P.E.I. were Eliana Monthony of Cornwall in division 7, Jacob Manning of the Eastern Kings Speed Skating Club in division 9, and Olivia Wood in division 14. Monthony’s medal was her third of the season and first gold, while Manning’s first place performance marked a strong return to competition after three seasons since his last competitive outing. Wood captured her first medal in her first ever off-Island meet. Also capturing gold medals for P.E.I. were Jenn Nickerson and Rob Binns, both competing in the Masters division. Nickerson, of Charlottetown, was competing off-Island for the first time, while Binns improved on his own provincial record time in the 777m distance on his way to the podium.

“We had a large team in Dieppe,” said P.E.I. coach Kathleen Cullen, “and they put up some great results. Our skaters always look forward to this competition with the Olympic ice and a big Island contingent competing. The team seemed to take that excitement and turned it into some excellent performances.”

Paul Tremblay of Saint John and Courtney Sarault of the host Codiac Cyclones club took top honours for male and female skaters at the event, which attracted a large field of 190 skaters from 11 Atlantic clubs.