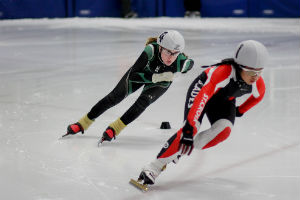 Mia Stewart earned a gold medal in division 2, on the strength of a win and a personal best time in the 400 metre distance, along with a new personal best in the 1500 metre event. With the win, Stewart closed her successful year which also included a pair of bronze medals earlier in the season. Anderson Arseneau captured P.E.I.’s other gold medal, in division 3. The win capped his strong season on the Maritime short-track circuit which also included a pair of silver medals in his four competitions.

Jane Bruce of Stratford took the bronze medal in division 4 with consistent racing and a new personal best in her 200 metre distance.

Carter Bruce posted the fastest times among all Island skaters, claiming fourth place in division 1, in his final tune-up before the Canada East Short Track Championships in Lévis, QC, on March 31st and April 1st. Also skating for P.E.I. in Hampton was Addison Bruce.

Fredericton’s Conor Murray captured top spot overall among male skaters in the meet, followed by his Fredericton teammate Colton Gough and by Dylan Domres of the St. Croix Blades. Angela Xu of St. Croix was the top female skater, followed by Anny Kang of Saint John and by Hannah MacNeil of the host Hampton club. 118 skaters from nine Maritime clubs took part in the competition.