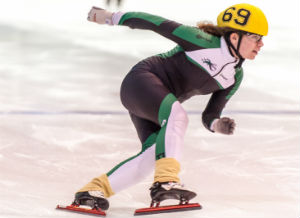 Andrew Binns (Division 1), Thomas McQuaid (Division 2), Liam Chatfield (Division 3) and Addison Bruce (Division 5) brought home silver medals for P.E.I. Binns continued his strong season by winning the 500 metre distance and improving on his personal best in the 1500m event, while McQuaid took wins in the 1500m and 3000m points race. Liam Chatfield grabbed the win in the 400m distance and a 1500m PB to earn his podium spot, while Bruce had three personal bests to propel him to his silver medal.

Eliana Monthony of Cornwall nabbed the Island’s lone bronze medal, in Division 1, after skating to a new personal best time in the 500m sprint.

Will Oliver of Saint John took top overall honours in the meet, followed by Andrew Binns. Misha Boulerice of Fredericton took third. Among female competitors, Carly Connell was followed by Saint John’s Maggie Oliver with silver and by Monthony who finished third overall.

P.E.I. coach Sarah Taylor said that the Island team skated well, despite consecutive competition weeks. “Many of these skaters competed in Fredericton the week before and back-to-back weeks are tough in our sport. Still, they came through with lots of PBs and some great races to finish 2016,” said Taylor. “It was a great first half of the season and we’re excited to see what the team can do in 2017.”