December 13th, 2018, Charlottetown – P.E.I. speed skaters closed 2018 with a podium sweep in the top division and a handful of medals at the Charles Gorman Memorial Speed Skating Championships in Saint John, N.B. recently. 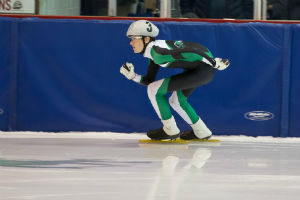 William Lyons took the division 1 gold medal, edging his teammate Kyle Connell for the overall top honours. Lyons, of Rock Barra, took wins in the 1500 metre and in the 3000m points races, along with second place in the 500m and 1000m events. Connell, of Charlottetown, grabbed a pair of wins in the 500m and 1000m distances, along with second place in the 3000m points race, to cap his comeback after a spill in his 1500m heat. Thomas McQuaid completed the Island sweep, taking the overall bronze with a second place finish in the 1500m and a third place finish in the 1000m among his results. The P.E.I. squad took five of the top six overall positions in the competition, with Matt Kozma and Carter Bruce ranking fifth and sixth, respectively. 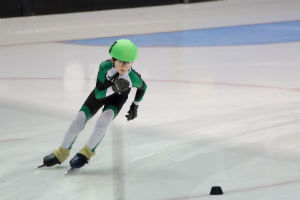 Charles Burke snagged a second gold medal for the P.E.I. team in division 6, with wins in all four distances and a trio of new personal best times. It was Burke’s second medal in as many outings, following a silver medal on home ice in October. Jane Bruce tallied a silver medal in division 5, after a win in her 600m race and three second place finishes. Bruce also notched three new personal best times enroute to her third medal of the season.