March 29th, 2017, Charlottetown – Already riding high on a banner season, Island short track speed skaters saved their best performances for their last and biggest races of the season, winning their first ever medals – six in all – at the Canada East Short Track Speed Skating Championships held recently in Ottawa. 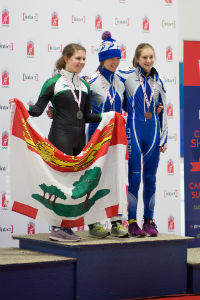 Skating against the top young speed skaters from Quebec, Ontario, Atlantic Canada and Nunavut, Andrew Binns of Stratford finished third overall in the 13 year-old boys category. Binns nabbed silver in the 400 metre distance, along with bronze medals in the 1,500m and 200m events. Jenna Larter of Brookfield snagged a silver medal for 14 year-old girls in the 200m sprint, along with a fourth place finish in a tightly contested 400m event, to finish fourth overall in her age group. William Lyons of Rock Barra grabbed a pair of bronze medals for 12 year-old boys in the 1,500m and in the 2,000m points race, along with fourth place in the 400m to secure fourth overall in his age category.

“When I saw them on the ice for their last practice session, I knew they were ready,” said P.E.I. coach Sarah Taylor. “We knew that this was one of our strongest, if not strongest ever, teams for Canada East. Will, Andrew and Jenna trusted the process and put themselves in position to win medals in most distances and they were rewarded for that. Our skaters have been working hard for the past few years so it was great to see the results we did. All eight members of our team in Ottawa skated personal bests and six of them put their names on new Provincial records. We could not have scripted it any better, we’re ecstatic.”

Binns earned three new provincial records, updating his own mark for 13-year-old boys in the 200m distance to 20.55 seconds and smashing Niall Burnett’s five year-old record in the 400m distance, with a time of 38.29 seconds. Binns and Lyons also teamed with Carter Bruce of Stratford to improve on the 12/13 year-old boys 3,000 metre relay record, with a new time of 5:02.20, more than three seconds faster than the time set by Binns, Kyle Connell and Thomas McQuaid in 2016, to win the B final (5th place overall) in their relay. 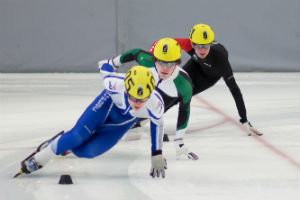 Connell and McQuaid won’t see their names disappear from the provincial record books, however. Connell added two new individual records of his own in the 14 year-old boys category, with a 20.69 second clocking in the 200m distance and 39.04 seconds in the 400m to improve on his brother Jack’s records that had stood since late 2011. Connell also teamed with McQuaid and Matt Kozma in the 14/15 year-old boys 3,000 metre relay, with their time of 4:57.84 taking more than 14 seconds off the record set by Michael Rogers, Jared Vriends and Zach Moran four years ago. Kozma also grabbed a new provincial record for 15 year-old boys, stopping the clock in 40.05 seconds to shatter the previous record for 400 metres, held by Michael Rogers since 2013.

The P.E.I. team won the banner for the most improved province at the Championships, calculated based on total points earned by the top two skaters for each province in each category. It was the first time the Island won the award, after finishing as runner-up for most improved in each of the last two years. With its six medals, P.E.I. finished third in the medal count, behind Quebec with 88 and Ontario who earned 12. New Brunswick picked up two of the 108 medals.

Speed Skate PEI President Jeff Wood congratulated the team, saying that the athletes and coaches deserved high praise. “The results we saw at this year’s Canada East are a testament not only to our growth in numbers in the past few years, but to the quality of our coaches, programming and the efforts of the athletes themselves. This season was another great step for us and we know we can achieve even more in the years to come,” said Wood.