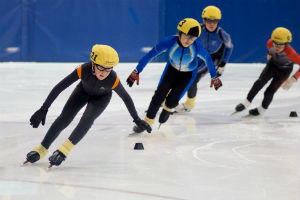 William Lyons of Rock Barra (Division 5) and Zack O’Meara of Charlottetown (Division 10) nabbed gold for the Island team, which included 27 athletes. Lyons took top spot in three of four distances, including a new personal best time in the 400 metre distance to earn his gold. O’Meara, competing in his first off-Island meet, also won three distances and overcame a penalty in one event to earn top honours in his division.

P.E.I. coach Sarah Taylor said the Atlantic Championship was a good building block for the Island team which is preparing for national level events next month. “We saw some great potential in Dieppe, as well as some things that we can continue to work on. The team should be excited about how good we can be for the rest of this season, if we keep working hard and stay confident,” said Taylor.
.
For full competition results and more information about Speed Skate PEI programs, visit www.speedskatepei.com.