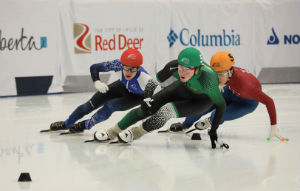 Peter McQuaid (centre) will be competing at the Canadian Junior Selections in Sherbrooke, Que. this week. Photo courtesy of Yi Kay.

Larter claimed the title of P.E.I.’s fastest ever female on the short track with her performances at the Canada Winter Games in Red Deer, Alta. last month. The Brookfield speedster had three top-15 finishes in the 46 skater women’s field at the Games and placed 13th in the overall standings. The Sherbrooke meet will be her fourth national level appearance this season.

McQuaid, from Charlottetown, will look to finish his junior career on a high note, after leading the P.E.I. men’s relay team to a strong fifth place finish in Red Deer. McQuaid also posted three top-twenty individual finishes in Alberta and will be looking for similarly strong finishes in Sherbrooke.

Binns qualified for the Sherbrooke event on the strength of his performances in Red Deer, which included three new individual provincial records in the junior men’s (14-15 years) age group and a top-20 finish in the 1000 metre distance. The Stratford native will be one of the youngest competitors in the men’s field in Sherbrooke.

For more information on the event, visit www.speedskating.ca.

Island Speed Skaters Back in Action