Lyons is making a return trip to the event, after a successful championship debut last year. In 2021, he notched a pair of new provincial records enroute to an 18th place overall finish in the field of Canada’s top 32 junior men. Lyons qualified for this year’s championships based on his eighth-place showing at the Canadian Junior Short Track Open held in Calgary earlier this month. 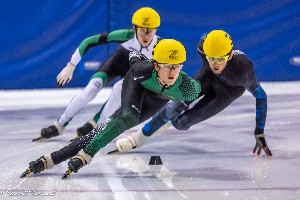 This year’s championships feature the country’s top 40 junior-aged skaters per gender and will select Canada’s team for the 2022 World Junior Championships, taking place in Germany in January.

Lyons, from Rock Barra, will be on familiar ice in Sherbrooke, where he trained during the 2019-20 season. He later returned to P.E.I. where he has trained with Speed Skating PEI’s high performance group for the past three seasons.

Lyons is the lone Atlantic Canadian male competing in Sherbrooke, alongside 27 Quebec skaters, eight from Ontario, three from B.C. and one Alberta representative. Lyons enters the weekend seeded 20th.

Racing gets underway in Sherbrooke on Friday morning at 11:10 EST. Competitors will compete for ranking points over six events, including two events in each of the 500-, 1,000- and 1,500-metre distances.

For live streaming and more information about the event, visit https://speedskating.ca/mec-events/2022-canadian-junior-short-track-championships/.