November 8th, 2021, Charlottetown – Kings County speedster William Lyons turned in a sterling performance over the weekend at the Short Track Canada Cup 1 speed skating competition in Calgary, earning himself a berth at the upcoming Canadian Junior Short Track Championships. Lyons was among an elite field of 60 male skaters at the Canada Cup, chasing up to 24 available spots at the Canadian Junior Championships. The 17-year-old skater placed 25th overall and sixteenth among junior-aged skaters. 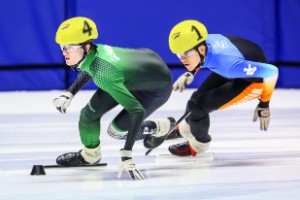 The Rock Barra native secured his strong overall placement with stellar racing in the 500-metre distance, where he placed 14th and become the second fastest P.E.I. skater of all time over the short-track 500m distance. Lyons set a time of 43.043 seconds, one of five races where he posted times below the 44-second barrier. With the fast time, which is also a provincial record for Intermediate men, Lyons now trails only Scott Beamish as P.E.I.’s fastest ever. Beamish was the last Island male to qualify for the Canadian Junior Short Track Championships, where he skated to a tenth-place finish in 2011.

Lyons trains in Charlottetown with Speed Skate PEI’s high performance program, under the direction of Speed Skate PEI Technical Director Sarah Taylor. The Island skater will have just under three weeks to finish his preparations for the Canadian Junior Championships, set to take place in Sherbrooke, QC from November 26th to 28th.

For more information about speed skating on P.E.I., visit www.speedskatepei.ca.