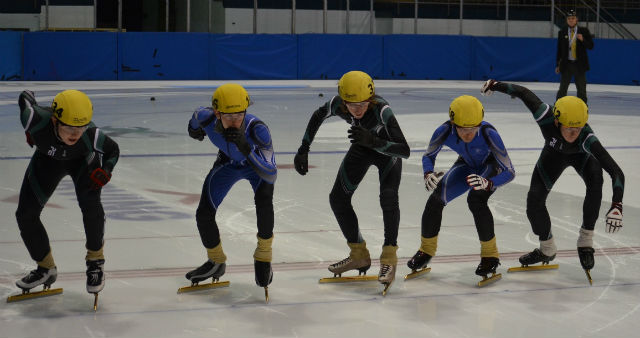 Connell skated to gold on the strength of three new provincial record times for Intermediate women. The Charlottetown skater smashed Ellen Christie’s 2007 records in the 500m and 1000m distances by almost 2 seconds each. Connell also bettered a 12 year-old record previously held by Jenna Gallant in the 1500m distance.

Rogers earned his overall title with wins in three of four distances, including personal best times in three distances. Also earning a medal for P.E.I. in the top division was Jared Vriends with a bronze. Isaac Gallagher of Fredericton snagged the silver among top division males.
Zach Moran of Charlottetown finished 4th overall, while siblings Andrew and Peter McQuaid rounded out the Island contingent in the top division, as both broke 50 seconds in the 500m distance for the first time.

Miriam Burnett of Charlottetown (left) works on an outside pass against a trio of New Brunswick skaters at the recent Atlantic Cup meet in Charlottetown. Burnett set a new provincial record and earned a bronze medal for the host P.E.I. club. Photo courtesy of Duncan McSporran.

Miriam Burnett added to her collection of Provincial records with a new mark for 14 year-old girls in the 1500m distance on her way to a bronze medal in a very fast Division 5.

“P.E.I. hosted a fantastic event this weekend,” said Speed Skate PEI President Rob Binns. “We had so many amazing volunteers that made this happen – not just from our Island clubs, but from right across the region. The people involved in the sport are really second to none.”