December 23rd, 2019, Charlottetown – Island speed skaters closed a memorable 2019 with strong results on several fronts and are looking ahead to 2020 after hosting a camp over the weekend featuring 2018 Olympian Jamie MacDonald. MacDonald, who was one of five females on Canada’s short track speed skating team in PyeongChang less than two years ago, spent the day with Island skaters at Charlottetown’s Eastlink Centre on Saturday.

Speed Skate PEI Technical Director Sarah Taylor said that the camp will give Island athletes a great technical foundation for 2020. “We’ve been fortunate to have some incredible guest coaches like Jamie and Scott Beamish come and spend time with our athletes in recent seasons. In our sport where technique is so important, the knowledge that they are able to share with our team is nothing short of priceless.”

Young Island skaters are looking to build on their performances and emulate the success of Brookfield’s Jenna Larter, who is now training at the Olympic Oval in Calgary. Larter most recently took to the start line at the Canadian Short Track International Invitational in Montreal, which featured 60 female skaters from five countries. The 17-year-old Islander had her best finish in the 500-metre distance, where she placed 40th, despite a crash in her last race. During 2019, Larter became the fastest-ever Island female in three short track distances and made her first appearance at the Canadian Junior Short Track Championships. 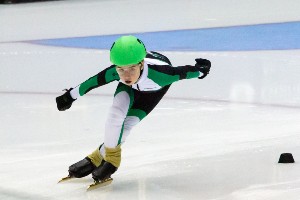 Andrew Binns of Stratford also posted strong results recently, racing in Group 1 of the season’s second Quebec Provincial Circuit (West) competition, in Drummondville. Binns won the A final in the 500-metre distance, posting the fastest 500-metre time in the meet, enroute to eighth place overall. Binns has been training at the Canadian Regional Training Centre (“CRCE”) in Montreal this season.

The Saint John competition featured 113 skaters from eight Maritime clubs, including 16 Island competitors. P.E.I. skaters will return to competition in the first weekend of January with Islanders competing at Quebec Provincial circuit meets in Laval and in Trois-Rivières. The following weekend, Rob Binns will be part of the 19-member Canadian short track contingent competing at the 2020 Winter World Masters Games in Innsbruck, Austria.

For more information about speed skating on P.E.I., visit www.speedskatepei.ca.