March 5th, 2018, Charlottetown – Island speed skaters grabbed three medals and put down some of their fastest times of the season at a pair of recent short track meets in Trois-Rivières, Quebec and Campbellton, New Brunswick.

In Trois-Rivières, five Island skaters took to the start line, with Andrew Binns winning a gold medal in Group 3. It was the first medal of the season on the Quebec provincial circuit for a P.E.I. skater. Binns grabbed wins in his 1000 metre and 1500m distances and was just shy of his personal best time in the 500m sprint to take to the overall win. 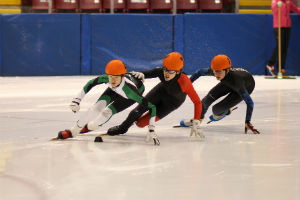 A pair of P.E.I. skaters competed in the Atlantic Challenge meet in Campbellton, with both Islanders earning podium finishes. William Lyons took the gold medal in Division 2, after winning all four distances and setting personal best times in both his 200m and 400m distances to help secure the gold. Rob Binns won the Island’s other medal in Campbellton, with a silver in Division 1. The Island Masters skater had a seasonal best time and victory in the 500m distance enroute to his best finish of the season.

Also skating for P.E.I. in Trois-Rivières were Jenna Larter, Matt Kozma, Kyle Connell and Peter McQuaid. Kozma made a strong debut on the Quebec circuit, with a large personal best time in the 500m distance and a twelfth place finish in Group 3. Larter skated in Group 1 for the second time, finishing thirteenth. Connell and McQuaid finished fourteenth and sixteenth, respectively, in Group 2.

Larter and McQuaid are now preparing to compete in the Canadian Junior Selections #2 meet in Calgary from March 21st to 24th, while Andrew Binns, Lyons and Connell will be part of P.E.I.’s team for the Canada East Short Track Championships in Lévis, QC on March 31st and April 1st. The Island squad had a breakthrough performance with six medals at last year’s Canada East event in Ottawa.