November 29th, 2018, Charlottetown – Island short track speed skaters earned medals and put up some of their fastest times of the season at a pair of recent off-Island meets.

Seven Island skaters took to the ice at the Harold Joyce Short Track Championships in Fredericton, N.B., with four members of the P.E.I. squad stepping on the podium for medal wins. 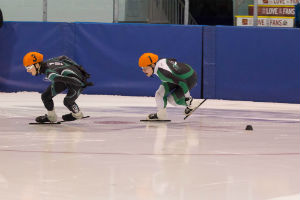 The Island contingent swept the male podium in Division 3, with Thomas McQuaid edging fellow Charlottetown skater Matt Kozma for the gold medal. McQuaid took top spot in three of four distances for the overall win, while Kozma notched a win in the 3000 metre points race and had a pair of second place finishes to secure the silver. Carter Bruce nabbed the bronze with a consistent weekend of racing to round out the all-P.E.I. podium. Also earning a bronze medal for P.E.I. was Addison Bruce in Division 4, giving the Stratford native his third medal in three meets this season.

Larter, of Brookfield, posted her best time of the season in the 1500 metres, on her way to 25th place in the distance. A penalty in the first round of 500 metre qualifying, however, proved a costly setback to her overall standing. Larter placed 41st overall in the competition.

McQuaid, of Charlottetown, posted a seasonal best in the 500 metre distance for his best finish in Laval, but suffered a fall in the first round of 1500 metre qualifying and a penalty in the third round of the 1000 metre event to finish 51st overall in the strong male field.

Island speed skaters will take part in their final event of 2018 at the Charles Gorman Memorial Short Track Championships at Harbour Station in Saint John, N.B. in December 8 & 9. The Saint John meet will serve as the final qualifying event for Island skaters seeking berths on P.E.I.’s short track team for the 2019 Canada Winter Games in Red Deer, AB.