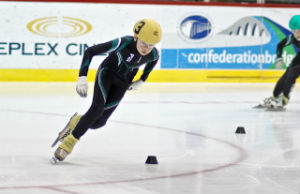 Matthew McKenna won one of four gold medals for P.E.I. at the recent Atlantic Canadian Short Track Championships in Dieppe, N.B. The Island team picked up a total of nine medals at the event. Photo courtesy of Kristen Binns.

Stepping to the top of the podium for P.E.I. were Eliana Monthony in division 6, Jenna Larter in division 8, Carter Bruce in division 8 and Matthew McKenna in division 9. Monthony posted a pair of personal best (PB) times enroute to her third medal and first gold of the season. Larter nabbed her third gold medal in as many outings this season, once again demonstrating her prowess in the sprint distances. Bruce earned his third gold medal among four podium finishes so far this season, while McKenna earned his first medal of the season after posting three PB times.

Taking silver for the Island squad were Stratford skaters Andrew Binns in division 6 and Addison Bruce in division 10. Binns improved on his own provincial record time for 12 year-old boys in the 400 metre distance on his way to the medal, while Bruce grabbed his first medal of the season after a pair of PBs.

P.E.I. coach Sarah Taylor said that the Island team had one of its best outings of the season. “Our skaters are always up for this meet and for the chance to skate on the Olympic ice as part of a big Island team. They’ve trained hard these past couple of months and were rewarded with great performances and personal best times that they’ll build on for the last competitions of the season,” said Taylor.

The fastest P.E.I. skaters in the event were Charlottetown siblings Peter and Andrew McQuaid, who placed fourth and fifth, respectively, in division 1. The McQuaids and Carly Connell have qualified for and are now looking ahead to the Canadian Junior Open Selections #2 meet to be held in Fredericton in March.

Roger Fulton of Fredericton claimed the top overall position in the meet, followed by Seamus Smith of the St. Croix Blades and Tyler Magee of Saint John, while Rikki Doak of Fredericton, followed by Courtney Sarault of the host Codiac Cyclones and Sarah Gilbert of Fredericton took the top three spots among female skaters.

The last Atlantic regional short-track meet of the season will be held in Halifax in early March, giving Atlantic skaters a final opportunity to earn berths in the Canada East Short Track Championships presented by Irving Oil, to be held in Charlottetown on March 26 and 27.

The Canada East event will see the Eastlink Centre play host to the top 11 to 15 year-old speed skaters from Ontario, Quebec, the Atlantic Provinces and Nunavut.