Jenna Larter of Brookfield qualified for her first Canadian Junior Short Track Championships and improved on her own fastest ever time by an Island female in the short track 500-metre distance at the recent Short Track Canada Cup 1 competition in Sherbrooke, Que. Larter stopped the clock in 46.247 seconds, enroute to 11th place in the distance. The Island skater also notched a seasonal best time in the 1000-metre distance, on her way to 21st place overall and 20th among junior females in the competition, which featured 59 elite female skaters. Larter, who now trains in Calgary, will compete in the Canadian Junior event on her adopted home ice at the Calgary Olympic Oval starting on November 29.

Andrew Binns of Stratford also took to the start line in Sherbrooke at his first Canada Cup competition. Binns had seasonal-best times in both the 500- and 1000-metre events and had his best finish in the 500-metre distance, placing 31st among the 60 male skaters. Overall, Binns ranked 50th at the competition and 35th among the junior men competing.

Meanwhile, Halifax played host to twelve Island skaters at the Citadel Cup, which was the first stop of the season on the Maritime short track circuit.

The P.E.I. team grabbed nine medals to kick off the season, with Charlottetown’s Zack O’Meara taking the Island’s lone gold medal, in Division 3. O’Meara won both the 400- and 3000-metre races, along with second place finishes in the 1500- and 200-metre events to secure the overall gold. 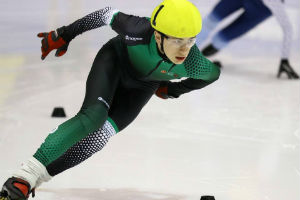 Taking home bronze medals for P.E.I. were Olivia Zhang in Division 6 and Davis Jack in Division 7. Also competing for the Island contingent in Halifax were Rob Binns, Jordan Koughan and Baiden Jack.

Speed Skate PEI Technical Director Sarah Taylor said that the Island contingent had a great start to the season in Halifax. “We had a huge number of personal best times, which is a great sign for the new season. Our team is excited about our home meet which is up next and for much more fast skating to come.”

The Halifax event featured 87 skaters from 11 clubs across the Atlantic provinces. Charlottetown plays host to the next stop on the Maritime speed skating circuit, with the Atlantic Cup Speed Skating Championships set for the Eastlink Centre on November 9 and 10.