November 10th, 2015, Charlottetown – Island speed skaters took home fifteen medals from the Atlantic Cup Speed Skating Championships held over the weekend at the Eastlink Centre in Charlottetown. The home-ice medal haul included five gold medals and was tops in the competition, which featured skaters from five provinces as well as a contingent from Nunavut. 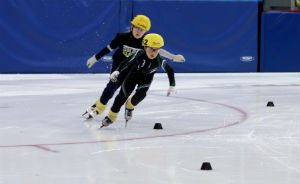 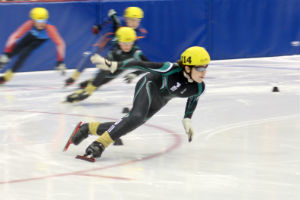 Andrew Binns (right) of Stratford won a silver medal and picked up a pair of provincial records at the Atlantic Cup Speed Skating Championships in Charlottetown. Photo courtesy of Kristen Binns.

McQuaid posted the fastest times among all Island skaters on the weekend and was joined in Division 1 by teammates Andrew McQuaid, Jared Vriends and Rob Binns. Binns posted a pair of new provincial records for Masters (40+) skaters, bettering his own previous marks in both the 500m and 1500m distances.

Roger Fulton of Fredericton claimed the top spot overall in the meet, followed by Seamus Smith of the St. Croix Blades. Sarah Gilbert of Fredericton was the top female skater, followed by Bethany McKinley-Young of Halifax and Simone Hebert of Saint John. 119 skaters from 13 clubs participated in the meet, which featured 19 veterans of the 2015 Canada Winter Games.

Speed Skate PEI President Rob Binns said that the event was a huge success. “The volunteer support from our Island clubs and from right across the region was tremendous. We can’t thank the volunteers enough for the work they put into making such a memorable event.”