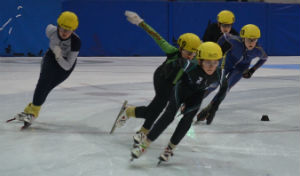 The medalists were among nineteen P.E.I. skaters in the field of over 135 short-track skaters from across the Maritimes.

“Our team has been training hard this fall,” said P.E.I. coach Sarah Taylor. “This meet was a great chance for our skaters to see what they could do – particularly for our Canada Games prospects on the big Olympic-sized ice in Fredericton. Any chance they get to try out some different tactics on the big ice is a plus for them. Our younger kids competed hard and came up with some great results too, so it was a great weekend for the whole team.”

The Fredericton meet had an added bonus for the P.E.I. contingent, as double Olympic medalist Anouk English skated in the same division as six Islanders. English won silver and bronze medals in Torino in 2006 before retiring from the national team and moving to New Brunswick to start a family. Island skaters went head to head with English in their 1000 and 1500 metre distances and in the 3000 metre points race.

P.E.I.’s speed skaters will be back on the ice for a mini meet at home this Saturday morning at the Eastlink Centre. They’ll then close out their 2014 competition calendar with the Charles Gorman Memorial meet at Saint John’s Harbour Station on December 13th and 14th.