Charlottetown’s Peter McQuaid led the way for the Island team, sweeping his way to the gold medal for males in Division 1 with four convincing victories. Jenna Larter of Brookfield took the Division 1 gold for females, while also putting her name on a new provincial record for Junior women in the 1500 metre distance. Larter shaved nearly a second from the previous mark set by Ellen Burnett during the 2011 Canada Winter Games. She also earned qualifying times for the Canadian Junior Open Selections #2 competition in March as well as for Quebec’s provincial short track circuit. 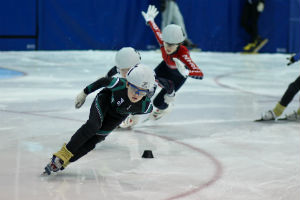 P.E.I.’s Anderson Arseneau leads the way out of a corner at the Atlantic Cup Speed Skating Championships in Charlottetown over the weekend. Photo courtesy of Kristen Binns.

P.E.I. coach Sarah Taylor said the Island team’s haul of twenty medals was icing on the cake after seeing so many strong performances from the team’s 35 skaters. “The number of personal best times, medals and provincial records was astounding. These young athletes love working hard with their teammates and our program only seems to grow and get stronger as a result. We’re competitive with anyone now and it is a lot of fun for our team.”

The meet saw a strong field of 140 skaters take to the start line, with athletes from five provinces as well as from the United States.

Speed Skate PEI President Jenn Nickerson said that the event was a huge success. “It was great to see the results of our skaters match the tremendous efforts and contributions of our volunteer team and sponsors. We’re very thankful for the support this event receives every year,” said Nickerson.

Island speed skaters are back on the ice for the Charles Gorman Memorial Championship at Saint John’s Harbour Station this weekend.