The program will run in Charlottetown this month, with six on-ice sessions providing an accelerated introduction to speed skating. The two-week program is open to youth with skating experience from hockey, ringette or figure skating. Speed skating officials say that the intro sessions will give young athletes a chance to experience the speed of another ice sport where Island athletes have excelled. 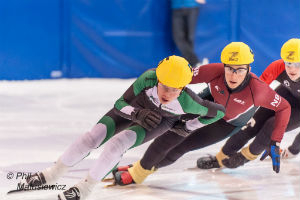 Speed Skate PEI said it expects strong demand for the special program, which is aimed at 9-12 year olds and older age groups. “Every season, we get inquiries from parents of these young athletes, wondering if there is a way to try speed skating,” said Speed Skate PEI President Jeff Wood. “Sometimes, kids at these ages can be apprehensive about trying a new sport. But, we know that the kids from these sports who try speed skating adapt quickly and have a lot of success. This program will hopefully remove some of their worries, since none of the participants will have prior speed skating experience. Once they finish,” continued Wood, “they’ll take some additional skating skills back to their other sports, or maybe want to continue with speed skating, which they’ll be very capable of doing.”

Ice sessions will be held at the Eastlink Centre from September 15 to 27, at a cost of $70 for the six sessions, including speed skate rentals. Full information, program schedule and online registration is available at www.speedskatepei.ca.

The Island speed skating body said that its regular season will commence on October 1 and that it’s already seeing strong registration numbers for 2016-17, after a banner season last year. The P.E.I. association played host to the Canada East Short Track Championships last March, capping a 25th anniversary year that boasted record enrollments and new performance benchmarks for its competitive skaters.

Fittings for rental speed skates for the introductory program and regular season programming will take place this Saturday, September 3, from 9:30 to 11:30 a.m. at the Eastlink Centre main lobby. Program registrations will also be accepted at the skate fitting session.