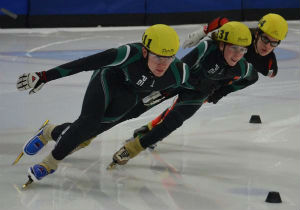 Zach Moran (left) and Peter McQuaid (centre) are among eight athletes who will represent P.E.I. in short-track speed skating at the 2015 Canada Winter Games in Prince George. Photo courtesy of Duncan McSporran.

The selected skaters will each participate in four individual events, including the 500 metre, 1000m and 1500m distances. The 3000m points race event has also been added to the Canada Games for 2015. In addition, P.E.I. will have a male team entry in the 3000m relay, where it hopes to match or better the 6th place finish of the 2007 team.

“These young athletes have spent much of the past three years training and preparing for the Canada Games. We extend our congratulations to each of them and wish them luck in their final weeks of preparations and in Prince George,” said Rob Binns, Speed Skate PEI President. “They are extraordinary young people who will represent our province with a great deal of determination and pride.”

Sarah Taylor, head coach of the short track team and 2003 Canada Games alumnus, added, “Our team has trained extremely hard over the past couple of years. In November, the group exceeded the performance targets we had set for February and they’ve since continued to push to a higher level. They’ve shown me that they are ready for Prince George. They’re excited to compete and we’re looking forward to seeing the results of their hard work.”

The following athletes will make up the P.E.I. roster: